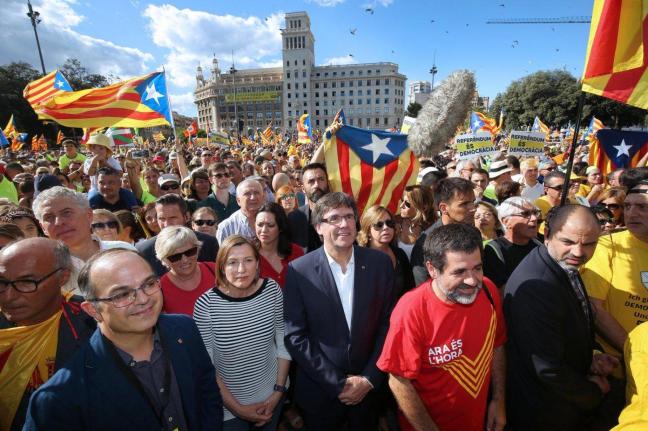 Editor’s Note: This story has been updated with a tweet from the president of the European Council in support of the Spanish government.

Just after the Catalonia region of Spain officially declared its independence on Friday, the Spanish Senate took direct control of the region’s governance.

The separatist movement, and the central government’s response, could set off a violent conflict in the country’s northeastern region. On the other hand, Spain’s strong response may also squash the opposition, ensuring the region remains in Spanish hands.

Either way, outside forces should not interfere — yet.

First, consider how complicated the situation is. On October 1, Catalans voted in a public referendum on the question of secession. Such voting was declared illegal by the Spanish government, which likely depressed turnout. However, an overwhelming number of those who did vote favored independence. All in all, 93 percent of ballots cast supported an independent Catalonia, with a turnout of approximately 43 percent.

The low turnout makes it hard to gauge the seemingly high popularity of secession. While it may be true that forced unification of an unwilling people is morally abhorrent, it may be just as wrong for a compromised election to seal the fate of an entire region’s people.

The clear takeaway is that we simply do not know whether this ballot represents the true desires of the people of Catalonia.

Second, intervention must be weighed on a cost-benefit analysis for both the intervening force and the world at large. The United States has a history of acting as global police force — for better and, often, for worse.

Despite the many miscalculations this mindset has fostered, including costly wars in Vietnam and Iraq, it is undeniable how much the international community has benefited from American hegemony. The post-World War II era has been the most peaceful in human history. This is due in no small part to the United States’ unmatched military might, and other nations’ fear of stepping out of line.

But the Catalonia conflict has not yet descended to the degree where American interference is necessary or even wise. Of course U.S. interests prefer a united Spain to a fragmented one, but this is not ample justification to wade into such a murky quagmire of moral culpability.

Now, the European Union has an even greater predilection against Catalan independence; the larger the number of states in the brotherhood, the less unified the whole can be.

But the EU, as well, should carefully consider any intervention in this domestic affair. Should it take a side in the conflict, it could spark the ire of those in opposition, further exacerbating the issue.

However, it seems some EU officials are against Catalonia’s independence. The president of the European Council lent support to the Spanish government in a Friday morning tweet:

For EU nothing changes. Spain remains our only interlocutor. I hope the Spanish government favours force of argument, not argument of force.

There’s a better solution: All outside parties should, for the moment, refrain from clear intervention and a taking of sides. At the same time, each should support the opening of diplomatic negotiations between Catalonia and Spain. In general, such a peaceful resolution would be preferable to any chaotic eruption. Even if the talks fail, the worst that could happen is the stalemate reverts to square one. There’s certainly no harm in trying.

On the Catalonia question, your author supports a wait-and-see approach. Should the conflict turn sour and bloody, and one side usurp the universal human rights of the other, interventional force might prove necessary. However, this has not yet happened. Until it does, we should stand aside. ■

Do you support Catalonia's push for independence from Spain? https://t.co/WCQV8o3Jce #AskTwitter

One thought on “Catalonia is Spain’s problem — for now”