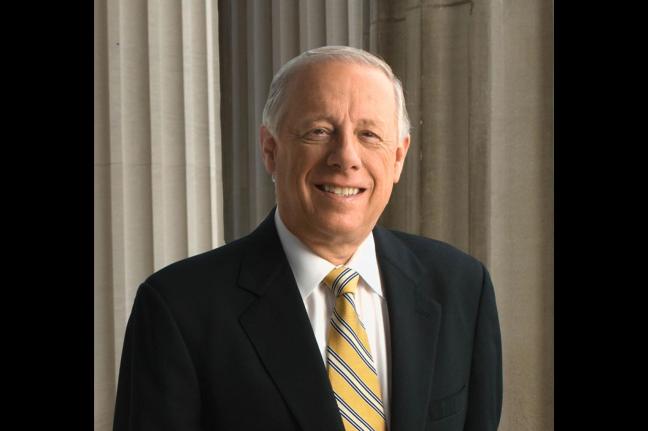 He kept Tennesseans in the dark for weeks, but you can’t keep a good man down. Or, as Michael Jordan would’ve put it: “I’m back.”

Former Tennessee Gov. Phil Bredesen, a Democrat, has declared his candidacy for the United States Senate.

With Republican Sen. Bob Corker declining a re-election run, Tennessee’s 2018 Senate race is wide open. In a deeply conservative state, a nominee with Bredesen’s political stature is about the best his party could have possibly hoped for — and then some.

According to political analyst Charlie Cook of the Cook Political Report, Bredesen’s entrance has single-handedly moved the race from a likely Republican win to a true toss-up.

On Wednesday, the Nashville Post was first to report the story:

According to multiple sources, Bredesen began calling major donors this afternoon to confirm that he is in the race. He has been mum about a campaign since U.S. Sen. Bob Corker announced he would step down next year, only acknowledging that he was contemplating a run. A formal announcement of his intent to run has not yet been made.

…His entrance in the Senate race means there will be a contested primary next August, something attorney and political newcomer James Mackler was hoping to avoid. However, it’s possible a competitive primary could spur interest in the race from Democrats who have been used to having a slate of candidates on statewide ballots that range from bad to abysmal in recent years. And along with a possibly competitive governor’s race and a national atmosphere predicted to be like 2006 and 2010 — as far as flipping seats — Bredesen’s entrance should make for a very interesting race indeed.

Bredesen has not faced a seriously competitive race since 2002, when he narrowly beat out Republican Van Hilleary for governor, and the campaign landscape has changed dramatically even since his last race in 2006. But enough money can presumably buy campaign staff who understand social media and the fast pace of the Twitter news cycle.

Just like Michael Jordan — after his second retirement, at least — I hope to see Bredesen come to Washington, D.C., as an older man who can still do good for the team in red, white and blue.

It’s no secret I despise Marsha Blackburn, the current Republican frontrunner, so it’s great to see her nervous about her new opponent. In response to the news of Bredesen’s candidacy, Blackburn released this statement:

Tennessee families want change and that is not what 74-year-old Democrat politician Phil Bredesen will bring to the United States Senate. Bredesen’s views are out-of-touch with Tennessee values, he supported President Obama’s liberal policies, is against second amendment rights and even authored a plan to give illegal immigrants driving certificates. Marsha is the only true conservative in this race who will ensure liberal Bredesen doesn’t block President Trump’s agenda in Washington.

Marsha, we do want change — you just don’t represent it. The Republican Party has a vice-like grip on Tennessee politics. It’s time to elect a knowledgable, moderate alternative to the conservative status quo.

In other words, it’s time to pull the lever for Bredesen.

I will agree with one thing: Bredesen is out of touch with Tennessee values. However, considering those values realistically include homophobia disguised as religious liberty, being complicit to white supremacy and calling out sexual abuse only when your football team is hiring a bad coach, I’d say not adhering to these values is a good thing.

Blackburn’s above statement is chock-full of loaded words and phrases, including Tennessee values, of course. Blackburn tries to stir the pot by mentioning illegal immigration — a racially-tinged bone thrown straight to her right-wing base. But what she fails to explain is how humanizing undocumented residents, or supporting common sense gun-control policies, somehow harms Tennesseans.

The truth? It doesn’t.

It seems we’re in for a close race. A Middle Tennessee State University poll from October shows Blackburn’s approval exceeding Bredesen’s by a mere 3 percentage points — a statistically indistinguishable margin.

As in the Alabama Senate election set for December 12, where Democrat Doug Jones is a normal polling error away from victory, safe Republican territory is becoming markedly less safe in the age of President Donald Trump. Should the building Democratic wave manifest in sweeping electoral wins, the GOP could find its fortunes in dire shape come November 2018.

So grab the popcorn, politiphiles. It’s going to be a good one. ■

One thought on “Bredesen’s Senate candidacy gives Democrats a chance”